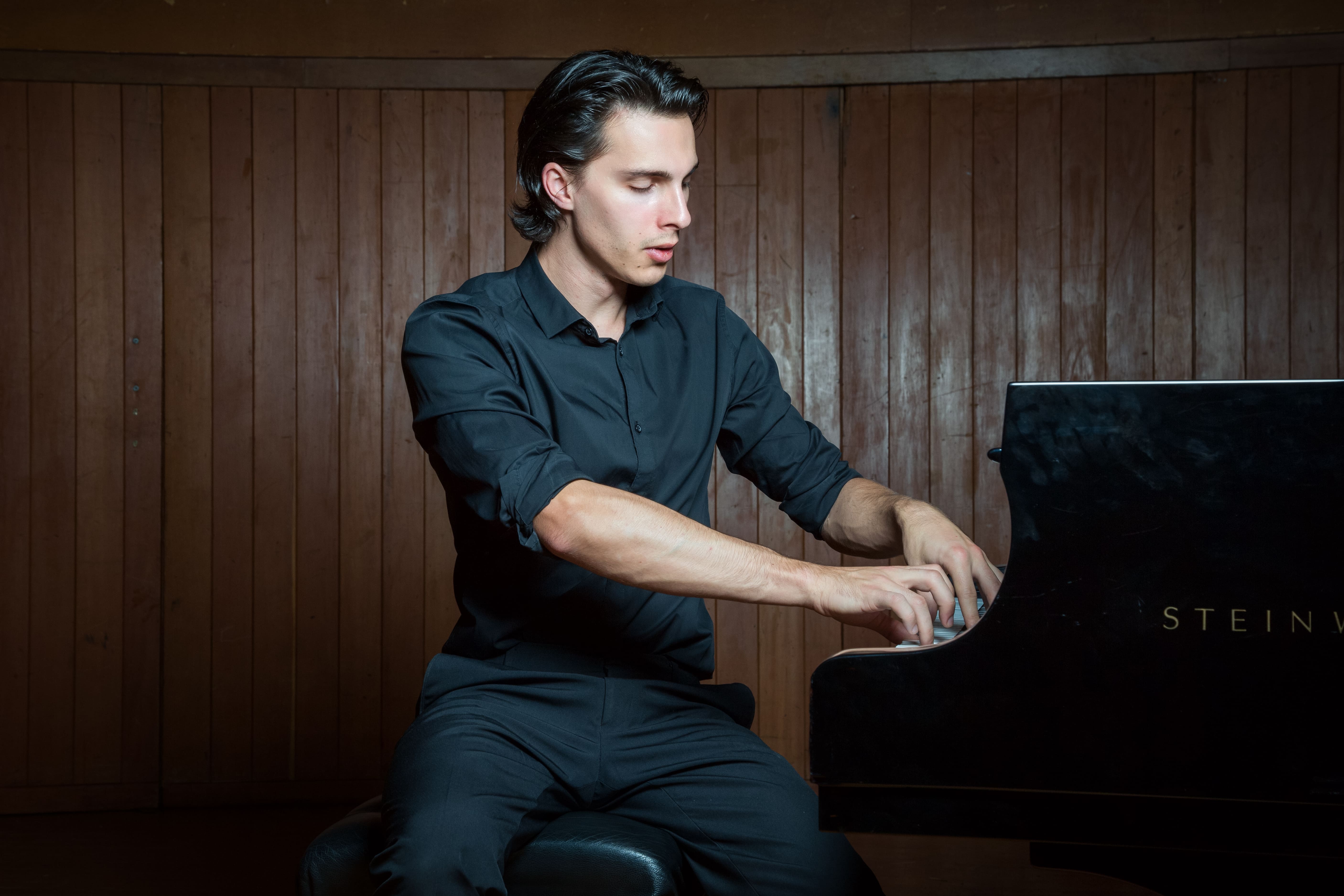 Liam Austin Pitcher (born December 23, 1993) is a South African composer, musician & teacher. He is known primarily for blending elements of classical, electroacoustic and electronica, as well as his distinctive piano improvisations.

Liam was born and grew up in Cape Town in the suburb of Newlands.

He was ailed with clubfoot at birth, and was not vaccinated for whooping cough, which he suffered from subsequently for the first year of his life, having to be frequently beaten on the back by doctors and his parents in order not to choke to death.

This is most likely what sparked his interest in percussion instruments.

Liam has Italian & Polish roots on his mother's side, as well as Cape Dutch & Welsh ancestry on his father's. His grandfather was a Polish refugee in WWII.

Degree: BMus in Composition from the University of Cape Town

Liam began studying the keyboard & piano at WPPS in 2003.

His study of the keyboard & piano discontinued at Bishops' John Peake Music School.

The keyboard was not offered as a subject, and a grade 1 certificate for piano was required in order to be accepted into piano studies, which Liam had not obtained while at WPPS. He learned the flute as a result for the first half of his first year, as well as percussion & drum kit from the second half onwards.

In his second year, he took an interest in the piece Rustle of Spring by Norwegian Composer Christian Sinding.

The Rustle of Spring is a complex piece of piano music above grade 8 level, but this did not stop Liam from learning the entire piece from memory and performing it at the Bishops Eisteddfod, in which he obtained a diploma from Francois Du Toit, South African pianist & teacher.

From this point he was accepted to study the piano officially at Bishops under the guidance of Judith Rhodes Harrison, with whom he gained a deep love for piano music and interpretation.

"Never in my life have I met a teacher with such an incredible sensitivity to the subtleties of piano music interpretation." - Liam

Liam left Bishops with the Piano Prize for best pianist at the School in 2011. The very same year he won the Rustenberg Piano festival, playing Liszt's Transcendental Etude in F minor.

In 2012 Liam was accepted into the South African College of Music at the University of Cape Town, where he studied the piano with Justin Kravitz, and piano accompaniment with Albie van Schalkwyk.

Half way through his first year, he pulled a ligament in his wrist, and could not play the the piano for six months. This resulted in a deferral of his degree to 2013.

In 2013, he returned to UCT and began studying the piano with Francois Du Toit, with whom he continued until he left UCT. Liam occasionally consulted Jose Dias & Franklin Larey on the piano while at UCT.

"I couldn't be more grateful toward Roucher. He is undoubtedly one of the greatest teachers of the piano in History, and is systematically turning me into the pianist I always wanted to be" - Liam

Liam began learning Percussion as a child when he was 0 years old. His Tiffany & Co rattle was the first instrument he ever played. Today, his original piece of electronic music 'Reverie' uses the very same rattle as one of its instruments.

At Bishops, Liam began learning percussion with Philip Pringle at age 13. This was his principle instrument until he was accepted to study piano, whereafter he designated drumkit as his second instrument, and ceased learning multiple percussion instruments.

Liam obtained his Grade 7 Trinity Guildhall for drumkit in 2011, obtaining a distinction for his examination and receiving the 4th highest mark in the country for his exam. His studies in percussion & drumkit concluded when he left Bishops, however he still utilizes various percussion instruments in his live performances from time to time.

At Bishops he obtained his grade 5 level music theory before he matriculated, under the guidance of Joc Wrensch & Andrea Rutter. He learned aural there with Mark Mitchell & Stephen Carletti.

At UCT he learned music theory and analysis with Martin Watt, and aural with Anri Herbst.

After his wrist injury, he chose to major in composition as opposed to piano performance, which included studies in composition and orchestration with Martin Watt for the first year of specialization.

At this point he had already been producing electronic music from a young age, and was well versed enough in the principles of music creation to be accepted, even though he had not written any instrumental scores.

Martin Watt provided a solid foundation for his understanding of music composition & theory - notably in functional harmony & counterpoint - and instilled in him a meticulous precision in digital score writing, equipping him for the modern world of composition.

"Hendrik Hofmeyr is in league with the great composers & teachers. His understanding of what came before us, as well as the historical progression of musical devices & meaning, is unparalleled in the modern world. He has personally unlocked concealed secrets which are hidden deep within the scores of the great composers, and has been generous enough to share what he knows with his students." - Liam

Liam's studies of music technology continued at UCT, first with Theo Herbst, and then with Meryl van Noie. With them he studied the writings of prominent audio experts, notably Ethan Winer, as well as technical principles of audio circuits and hardware, and the basics of electronic music production, as well as the mathematics of audio. They also covered advanced notational techniques using Sibelius, and worked primarily in Logic & Ableton in classes.