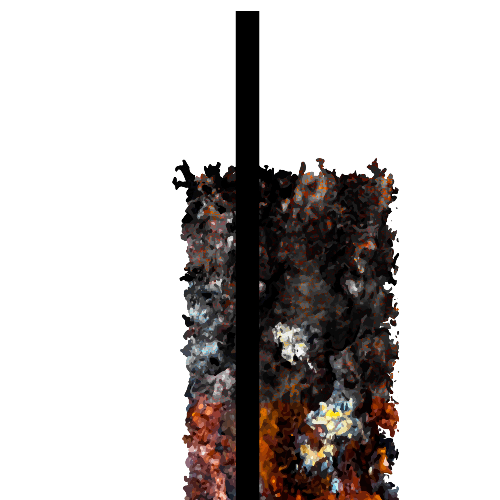 This is the second album of original piano music in a series of ten albums of piano improvisations which I recorded periodically and spontaneously throughout 2019, at Cape Town Sound Studios.

The naming scheme of this particular album utilizes some of the most highly searched shapes on the internet.

'Point' is a brief solo piano aphorism in which I explore chromatic, quartal and quintal harmony in a combined environment of contrapuntal and homophonic figures.

The piece is mostly free in phrasing and rhythm.

'Line', in the key of C minor, begins with a chromatic descending contrapuntal figure which immediately develops in the manner of a fughetta without specific harmonic rules.

It then transitions into a freer and more romantic/impressionistic improvisatory section.

'Arc' is a slow and lyrical piano aphorism in the key of C minor, which remains largely diatonic in the home key. It is primarily a conduit of expression, using speech-like rhythmic patterns, and long, uneven phrases.

It is rich in expressive micro-rythmic, as well as descending sequential patterns.

It is primarily centered around a mirrored scale on A flat, which inflects onto A flat harmonic and double harmonic minor.

It contains a dark and expressive climax after the half-way mark in the subdominant minor (C Sharp minor).

It returns to the home key in the final section and ends on a subtle and soft tierce in the high register.

'Circle' is built on an ostinato arpeggio / scalar figure in the right hand (sometimes both hands), which freely flows between C minor and its closely related keys.

The lengthy piece seems to continue infinitely, gradually sharpening and flattening at will.

About the Fantasy Scherzo・Program Notes

'Pentagon' is a solo piano fantasy scherzo which primarily consists of the juxtaposition of very smooth arpeggio figures with more staccato 'scherzo-like' figures which are playfully dramatic in timbre.

In the D section of the piece, I utilized an over-holding extended technique, in which the pedal and left hand lift while the right hand remains depressed.

The loud bass notes in the left hand resound notes held down by the right hand.

The improvisation begins quite meek and small, but gradually grows in thickness before climaxing.

'Hexagon' is a barcarolle in F Dorian which is mostly in 6/8 time.

It occasionally inflects into other keys and modes before returning to F Dorian.

It contains a particular excursion into a very rhythmically speech-like section before finding its way back to the original material and key.

'Rectangle' is an improvised piano prelude which explores cross rhythms, primarily of 3 against 2, but later developing micro-rhythmic alterations and adaptions.

About the Piano Prelude・Program Notes

'Triangle' is a dark, dissonant and chromatic piano improvisation which mirrors the hands around the axis of D natural.

The outer melodies are exact mirrors of each other, and so are the inner chordal accompaniments.

About the Fantasy March・Program Notes

'Cross' begins as a multicoloured fantasy and develops into a dark and driving death march.

It achieves its dark timbre by utilizing the octatonic symmetrical scale, which alternates between minor and major 2nds.